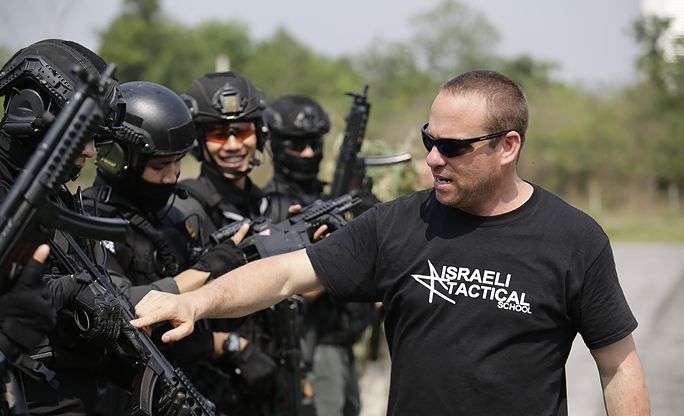 Our course is designed for beginners or/and students with experience in the security industry.

​The majority of the course is hands-on live-fire urban room-clearing CQB at the team levels. The course was designed to be with minimal classroom time.

The course’s focus is on realistic teamwork tactics scenarios; to achieve it, we utilize 360 live-fire shoot houses (Florida & Poland locations); this allows us to test abilities in the closest environment to the real thing. We conduct additional training utilizing force-on-force to test tactical ideas and reactions with the threat as role players. Still, the majority of the course is urban & vehicle live-fire exercises.

The course follows the Israeli Delta Force (Sayeret Matkal) hostage rescue doctrine, and the lead instructor of the course is Tomer Israeli, a former officer in the Shin bet.

Tomer is also a former captain and team leader in the Israeli army with several deployments in Lebanon include the 2nd Lebanon war in 2006. In the 2nd Lebanon war, Tomer led his recon team 20 km behind enemy lines and was responsible for supplying field intelligence and target acquisition for the Israeli Airforce jets and missiles during the war. At the beginning of his army career, Tomer served in the Israeli Delta Force (Sayeret Matkal – Yuval team) &  Golani – Orev before he went to officer course.

In 2011 Tomer founded in Washington DC – an Israeli tactical school focusing on Executive protection and counter-terror training for professionals and civilians.

Contact
Open chat
1
Hello 👋
Do you have a question? Don't hesitate to send us a message.